Participants from across the globe came together to battle for the championship title at this year’s Global Student Challenge Finals between April 30-May 6. We were elated to witness the enthusiasm and the passion with which the participants from over 17 countries, 38 teams, and 164 students, competed in every round throughout the week for the Championship title and cash prizes worth a total of €10,000.

We welcomed all participants online on Zoom on April 30, Saturday from different time zones – right from California to South Korea. We started off with a few fun games! The teams were divided into breakout rooms for some interactive sessions where they talked about interesting topics such as unique things that make them similar or exploring each other’s culture, and exchanging ideas about their career and ambitions. 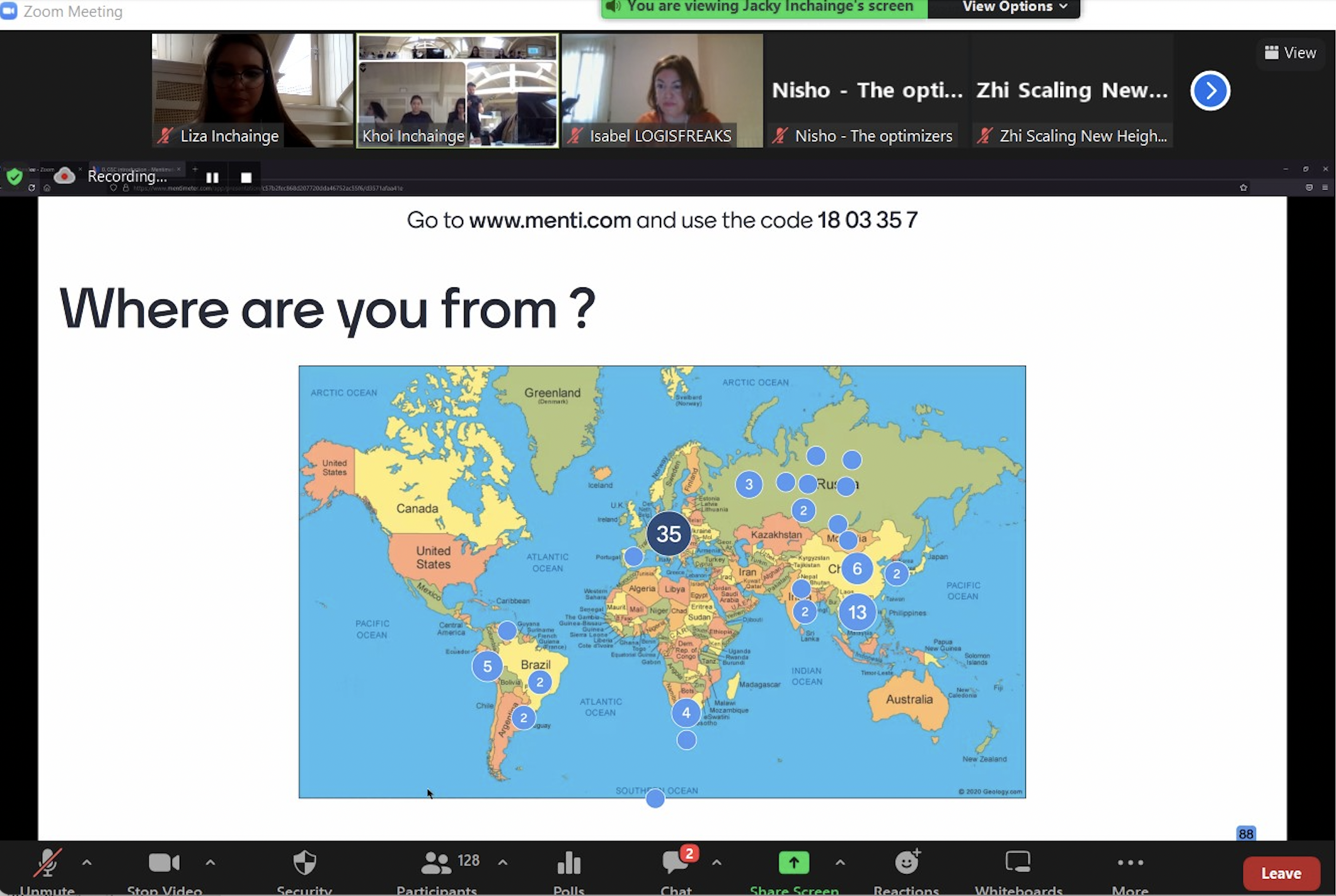 During these ice-breaker rounds participants also shared with each other some fascinating details such as their favorite cuisines, the recipes of their own cultural food, or just small anecdotes about themselves. We also had a lot of fun when we asked the participants to Guess the Flag. There was little twist there, though! For every correct and fastest answer, participants were given a word. At the end of the game, once the participants had collected all the words, they would have to make a sentence with those words. The sentence in question is, “At Inchainge, we develop value chain leaders.” Whoever came up with the sentence first, won!

But we must say that some of the sentences were quite creative and amusing!

Round 1 was all about Risk and Resilience

The first round saw participants tackle a crisis. They had to ensure that their organization recovers from the shock of the system by rapidly adapting and adjusting to its new circumstance. This was probably the most difficult round for our participants since they were not only working their way into the Fresh Connection but also, for the very first time, they witnessed the business simulation game with all its newest features. In fact, this was the first time that anyone had experienced the Fresh Connection with all the latest add-ons!

Towards the end of Round 1 participants did state that “it was difficult” but at the same time it was an interesting learning process. As we believe in learning by doing, we were confident that the participants would perform well…which they did!

Let’s take a look at some of their stats.

And we also have the names of the top 20 teams from Round 1: 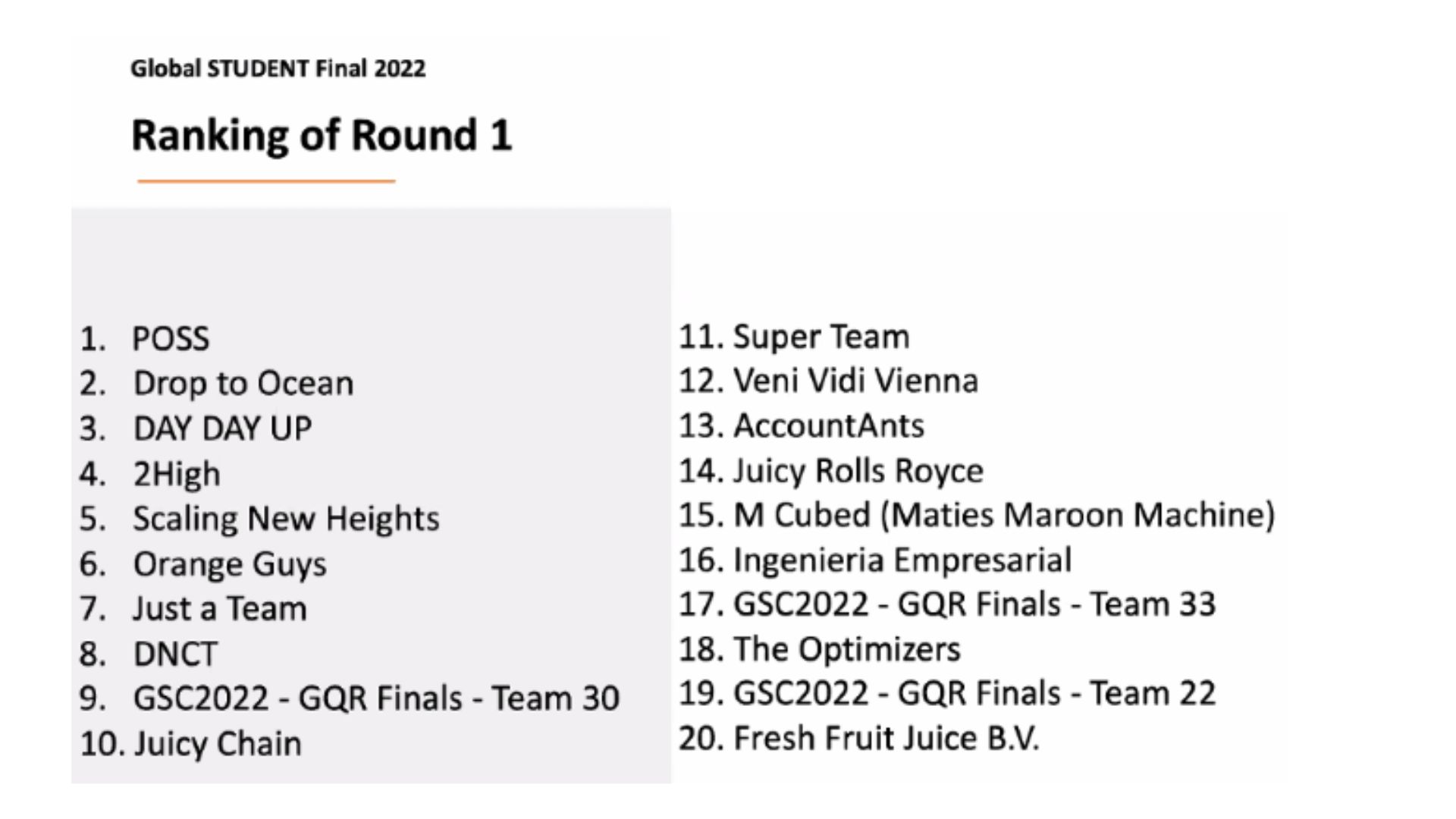 Round 2 was about building relationship with the Suppliers

To make clear strategic moves, participants were encouraged to set their forecasted ROI KPI. The second round heated up quickly as participants were faced with more difficult challenges but this time, they had the power of experience. The time constrain of merely a day was deliberately imposed upon them since we knew that they are the best students in the world and this would help them get a glimpse of a real-world scenario in supply chain management. At the end of Round 2, we were pretty amazed by the stats: 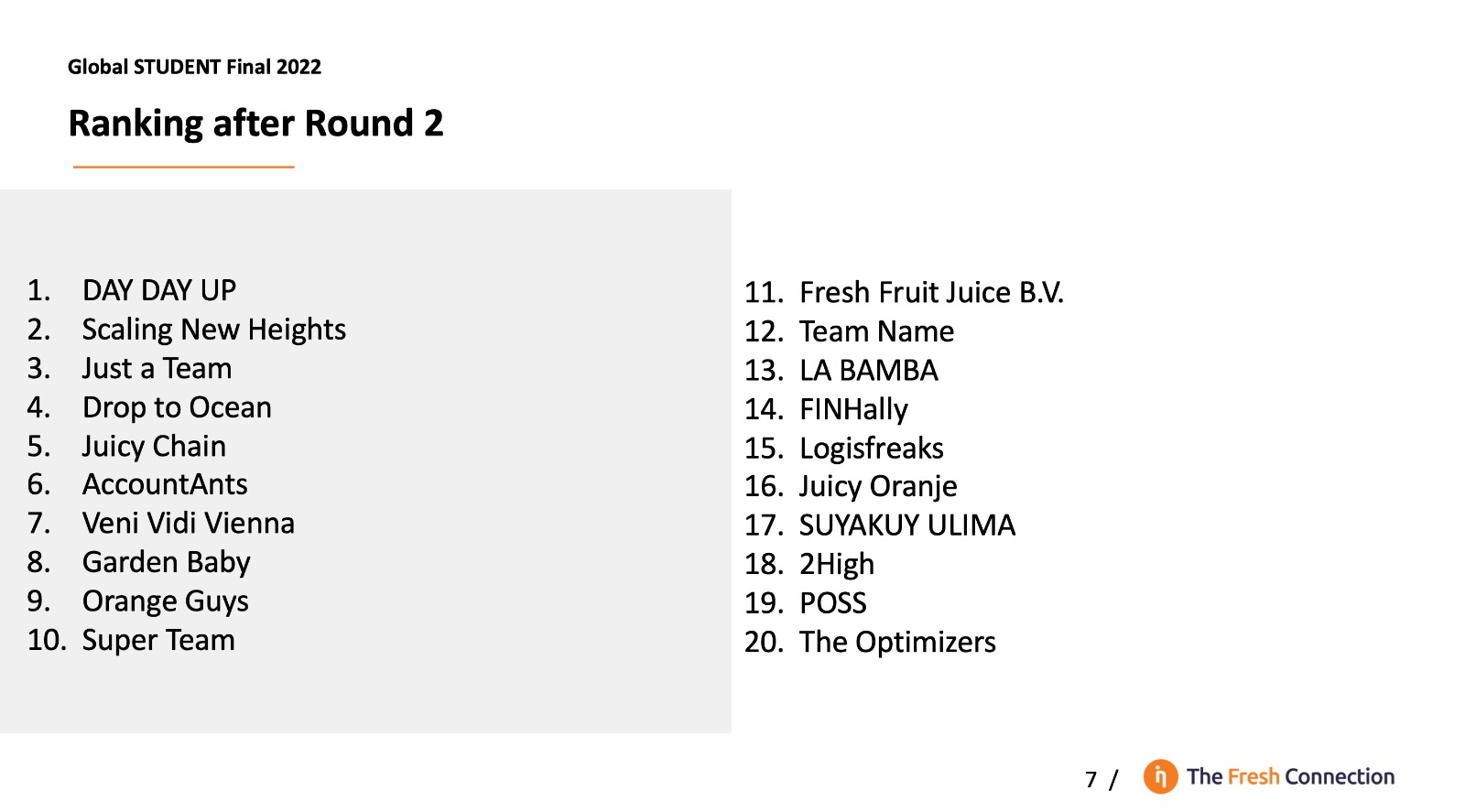 Round 3 involved a supplier development program

As supplier contracts expired during Round 2, participants faced new and more difficult challenges. The Supplier Development Program stated that the annual costs per supplier would be €60,000. On the other hand, the European Union introduced new import controls on fruit pulp deliveries from outside the bloc, in what seems to become a new trade war.

Round 3 was perhaps the most exciting and the most challenging for the participants as this was when their fate in the Championship title would be determined. It was inspiring to see how they all performed under tremendous pressure and they all came out with flying colours. Here are some stats for Round 3:

It was quite an unforgettable week and the participants made it through every challenge which came their way. We saw the best of the best compete across time zones, around the globe. It was certainly a privilege. After a lot of speculation, we were finally able to list down the winning teams. 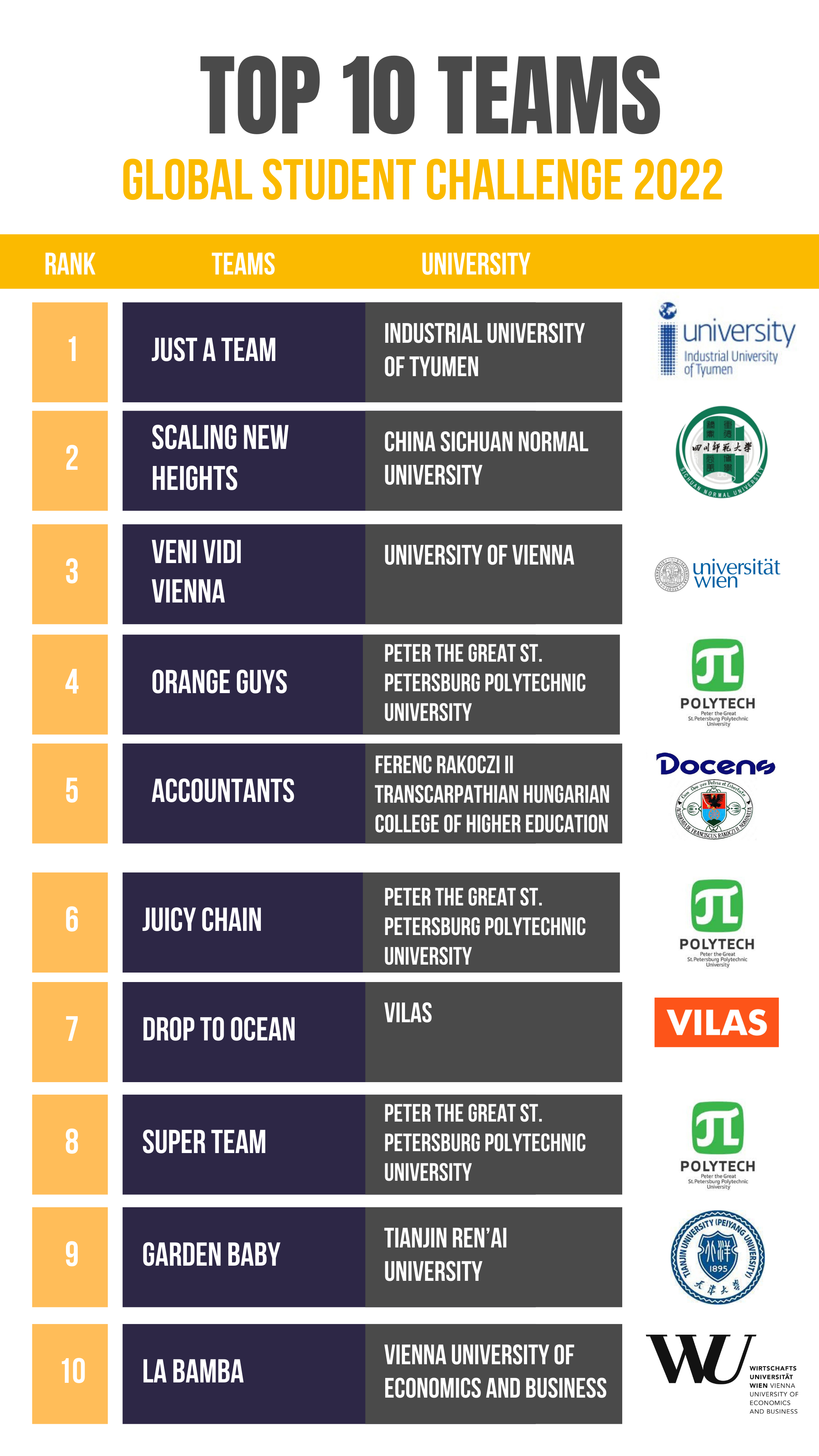 About the Global Student Challenge

The Global Student Challenge is the #1 SCM Student Competition in the world, which allows students to gain valuable knowledge, further develop their skills, expand their professional network, and much more. The Challenge pits teams from top business schools and universities from across the globe against each other in the search for the world’s Top Talent in Value Chain Management. By participating in this Challenge, students experience the life of a Corporate Executive by running their own virtual company together with their team.

Only the top 10% of the teams from curriculum courses get invited to one of the three Global Qualification Rounds (GQR). During these GQRs, teams from around the globe compete against each other for a guaranteed spot in the Global Final.

Organized by Windesheim University of Applied Sciences and Inchainge

For the past 9 years the Global Final Week of the Global Student Challenge has been hosted by Windesheim University of Applied Sciences and organized in partnership with Inchainge. In previous years the Global Final Week would take place at the Windesheim campus in Zwolle, The Netherlands. This year for the second time, we hosted the event fully online. We were joined by students from across the globe on Zoom and Inchainge is proud to present this year’s Global Finalists. A big thank you to Windesheim for many years of partnership and once again being a gracious host!

Are you an educator interested to let your students take part in the Global Student Challenge?

Since 2018, the competition is only open to students that have experienced The Fresh Connection, The Cool Connection, or The Blue Connection in a course, hosted by an educator, who has been certified by Inchainge.

Would you be interested in integrating or learning more about our integrating our game-based learning solutions? Please fill out the inquiry form here and we will be happy to provide you with any help you may need.